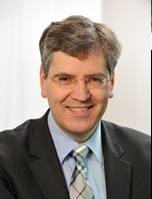 Topic: Where is IFRS heading in the new world order?

Prof. Dr. Andreas Barckow has been President of the ASCG (DRSC) since 1 March 2015.

Andreas Barckow was the lead technical partner for accounting matters in the German member firm of Deloitte in Frankfurt. He also led the firm’s IFRS Centre of Excellence, a group of professionals providing advice on financial reporting topics to audit partners and senior staff. Furthermore, he was a member of Deloitte’s Global IFRS Leadership Team, the global technical body in charge of setting the Deloitte policy on IFRS matters.

He holds a degree in Business Administration from the University of Paderborn, having studied both at Paderborn (Germany) and Monash University in Melbourne, Australia. In 2003, he graduated as Doctor in Business Administration from the same institution, with a dissertation on the accounting for derivative financial instruments and hedging strategies under German GAAP, IFRS and US GAAP. In 2009, he was appointed adjunct professor of international financial reporting at Justus Liebig University in Giessen. He has been appointed Honorary Professor at the WHU – Otto Beisheim School of Management in Vallendar in January 2016.